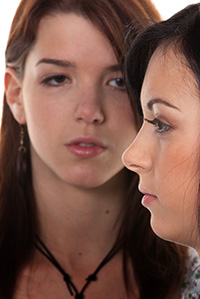 Hazing is when a person who wants to join a group is expected to do things that are very embarrassing, dangerous, or illegal. The group might be a club, sorority, or team, for example.

People sometimes think hazing is a just a harmless part of joining a group. But hazing can really hurt someone physically and emotionally.

Hazing can take many forms. Examples of hazing can include the following:

What are warning signs of hazing?

Here are some possible signs of hazing:

What can I do to stay safe from hazing?

If you are concerned about hazing, try to find out if a group is known for having mean rituals. If you think you are going a place where you might be hazed, have a plan to stay safe. Stick together with friends you trust, and make sure you have a way to get home safely.

If you are being hazed, tell an adult. Some states have laws against hazing. Remember, no one has a right to hurt you or pressure you to do something that feels wrong!

Read about how one girl fought hazing — and won.

"I was so excited when I first decided to pledge a sorority in college. However, soon my pledging experience changed and the sisters of the sorority became unfriendly and verbally abusive. My ten pledge sisters and I dealt with being blindfolded, yelled at, lied to, and harassed, and I even suffered physical pain. I made it through all of it, though, and after attending my first national sorority convention, decided I wanted things to change. I refused to participate in any hazing events for the next pledge class, and eventually left my chapter.

It wasn’t until almost a year later that I got the strength and courage to contact the sorority’s national officers, who not only told me they were proud of my courage but were also kind enough to remove my disaffiliated status and make me an alumni sister.

Hazing may be tradition, but traditions can change. Stand up for yourself, and don’t just go along with it. Hazing is harmful in more ways than people can imagine. Hazing does more than leave bruises or emotional wounds that may never be healed. Hazing can ruin people’s friendships as well as people’s lives.
My organization nationally is very openly against hazing. They made it known at our convention that we could trust them and lean on them. That is what sisters are for."