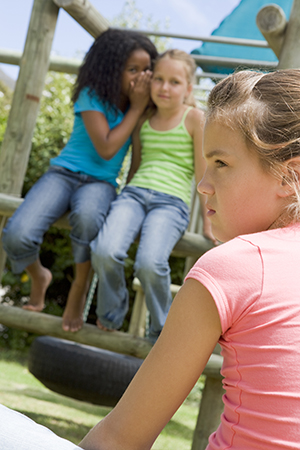 Girls may bully in the same ways guys do or in different ways.

Sometimes, girls bully in ways that are hard to see, like hurting someone’s feelings or their relationships. These can include the following:

Hurt feelings can be as upsetting as a hurt body. If you are being bullied, talk to an adult you trust. Adults can work to help stop the bullying and can offer support.

“There are all types of bullying, and most of them can’t be solved by a stupid comeback or something. Yeah, boys usually bully more than girls, but most of the time they don’t do it by insulting you. Guys just punch people in the face and/or call them a name and get over it, but girls attack you from the inside. Girls might act sweet in front of adults, so when you try to tell someone, they don’t believe you. They might bully you by spreading rumors or excluding you or any number of things. And they all hurt really badly.”
–Heather Rose, Ohio

Read more quotes from girls on bullying and how it makes them feel.

Here are some fast facts about bullying and girls: