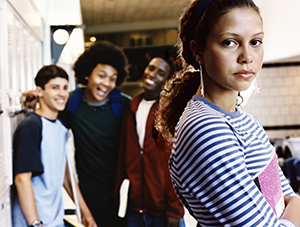 Boys bully girls in some of the same ways that girls bully each other. They may tease a girl, embarrass her, call her names, or hit her, for example. But boys sometimes bully girls in different ways. For example, a group of boys may make unwelcome comments about a girl’s body as she walks down the halls each day in school.

Sometimes, bullying that is based on your sex is considered harassment. Harassment and bullying are alike in some ways but are not exactly the same. Basically, harassment is when someone treats you very badly very often because of a certain trait you have, like your sex or sexual orientation. It can include touching, nasty words, and hand gestures. If you think you have been harassed, please tell an adult. Special laws may protect you against harassment that hurts your ability to get an education. You and an adult can learn more about harassment laws.

Remember, any kind of bullying is wrong and never your fault. Read our tips on what to do if you are bullied.

“I was sent to this school not knowing a single person. My first day in English class started it all. Kevin was a boy in my class who sensed my insecurity and nervousness right from the start. He made up this rumor that I was a lesbian. From that day on, he and his friend taunted me, shoved me into lockers, tripped me in the halls, embarrassed me and kept me miserable. Teachers picked up on it and always punished them, which made it worse because they would make up some new rumor about me. One day I went to school and found out they had been suspended. It turned out that I hadn’t been the only girl who had been bullied by these boys. A brave girl had reported them to the principal and the boys were suspended for sexual harassment.”