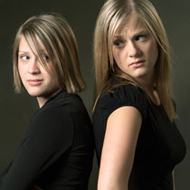 Being bullied hurts, but bullying other people often comes with its own problems. For example, kids who bully are more likely than other kids to get in trouble in school — and with police.

Here are some facts about kids who bully:

Kids sometimes bully because they are having trouble at home or have a hard time handling their feelings. If that sounds like you, talk to an adult you trust, like a parent, teacher, or school nurse.

Bullies also may feel bad about themselves. You can learn more about having good self-esteem. If you have been mean to others, it’s never too late to change. Check out some tips for how to stop bullying.

"I made a real effort to get to know people I wouldn’t normally spend time with and found out how wonderful these people were. I made so many real friends. I knew these people wouldn’t stab me in the back or talk bad about me when I wasn’t around.

My senior year, my year of change, was one of the best of my life. I made so many new friends and found out that you don’t have to be mean and hurtful to have good friends. I was more popular being respectful and kind to others than I would have ever been had I stuck with being mean."
–Anonymous, Age 21