Could I have a mental health problem?

Talking to your parents about emotional problems 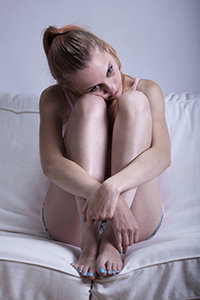 Eating disorders can be very dangerous. They even can be deadly.

Keep reading to learn about some of the more common eating disorders and ways to get help.

What is anorexia nervosa?

Anorexia nervosa (say: an-uh-REK-see-uh nur-VOH-suh)) , often called anorexia, is a very dangerous eating disorder. In fact, it is more deadly than any other mental health condition.

Someone with anorexia often thinks about food and limits what she eats very strictly. She may feel like she is getting control over her life by controlling her eating. But the truth is that the disease is in control.

A person with anorexia may have some or all of the following signs:

Anorexia can cause a lot of serious problems, including weak bones, infections, seizures, and heart trouble. If you think you or someone you know may have anorexia, talk to an adult you trust.

Do you exercise a lot?

Usually, exercising is great. But sometimes girls exercise to control their weight so much that they hurt their bodies. Read more about having a strong drive to exercise, even when you may be hurting yourself.

What is bulimia nervosa?

Bulimia nervosa (say: buh-LEE-mee-uh nur-VOH-suh), usually called bulimia, has two main parts. These are binge eating and purging, which is trying to make up for the binging.

Binge eating is eating an unusually large amount of food in a short time. During a binge, a person may eat really fast even though she isn't even hungry. Someone with bulimia usually feels she can't control the binging, and may feel really embarrassed about it.

Trying to make up for the binging can take different forms. Some examples include the following:

Because of these behaviors, people with bulimia may not be overweight. But they often worry about what they weigh and how their body looks.

Bulimia can cause serious health problems, including damage to your throat, teeth, stomach, and heart. If you think you or someone you know may have bulimia, talk to an adult you trust.

What is binge eating disorder?

A person with binge eating disorder eats an unusually large amount of food in a short time and feels out of control during the binges. For example, the person may eat an entire bag of cookies and a whole pizza in one short sitting.

A binge eater may feel like she can't stop overeating. That's why binge eating disorder is also sometimes called compulsive overeating. Everybody overeats sometimes, but a binge eater does it often, like once a week or more.

People with binge eating disorder also may do the following:

Binge eaters are often overweight or obese, because they don't do some of the things people with bulimia or anorexia do, like throw up food or diet very strictly. Binge eating can cause a lot of health problems, including conditions that come from gaining too much weight, such as diabetes and heart disease.

People with eating disorders are more likely to think about suicide. If you or someone you know is thinking about suicide, get help. You can call the suicide hotline at 800-273-TALK (800-273-8255) or 911 for immediate help. You also can read more about suicide.

How do I get help for eating disorders?

Eating disorders are real medical illnesses. They can lead to serious problems with your heart and other parts of your body. They even can lead to death.

Treatment for an eating disorder may include talk therapy, medicine, and nutrition counseling. Treatment depends on the type of disorder and the needs of the person who has it.

If you have an eating disorder, you may feel really bad. Don't give up! You can feel better. Check out a message of hope from Demi Lovato.

You also can be a great friend to someone who has an eating disorder. Learn how to help.