Ways to say "no" to alcohol 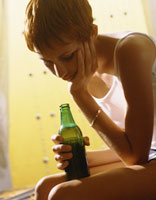 Booze. Sauce. Brewskis. Hard stuff. Juice. Call it what you want, but alcohol in any form — from beer to a fruity drink — can hit you really hard. Sure, alcohol may make you feel good for a little while. But it can cause so many problems. In fact, teens who drink are more likely to become victims of a crime, including a sexual attack. They are more likely to be in a drinking-related car crash. And they are more likely to have problems with alcohol later in life. Not to mention that drinking can make you act goofy, throw up, or pass out. It also can make you gain weight, become addicted, have problems in school, and otherwise mess up your life.

Of course, it can be tough to say “no.” Remember that some of your friends may want to say “no” too. You can work together to stay strong. If you want help figuring out how to turn down a drink, check out some of our clever comebacks.

What do teens think about alcohol?

With all the images on TV and talk about drinking, it’s easy to think that pretty much everyone drinks. The truth is that so many teens have the smarts and the courage to say “no.” Check out what some girls are saying about alcohol.

“Relatives of mine drink, and I dislike it a lot more when they drink near me. I would never put a sip to my lips for as long as I live.”

“Some of my friends drink, and I tell them not to do it. I don’t want them to get hurt. I talk to my friends and help them out because I care.”

“My friend has friends who smoke, drink, and do drugs, and she tries to stay away from them now. She is always with the people like me who care and won’t let her do those things, the kind of friend you should be to friends who have that problem.”

“I know some people may be curious about alcohol and tempted to try it. Tell someone you can trust and work on this situation, and that way you’ll find it easy to deal with. Stay above the influence!”

Be smart about alcohol

You may have heard that drinking alcohol at a party helps you to loosen up, talk to people, and make new friends. But the truth is that lots of teenagers know that alcohol — even a little — can make you have less control over what happens to you and your body. You can end up in uncomfortable or even dangerous situations. The safest choice is not to use alcohol at all. And remember other ways to stay safe around alcohol:

Alcohol is a drug. How can it hurt your body?

Alcohol can cause short-term and long-term damage to your body. Look at the picture to find out how alcohol affects your health.

Read a text version of this information

How much alcohol would it take to affect a person?

How fast alcohol affects you is influenced by many things, including your weight, how much you've eaten, and how fast you drink. Changes in your hormones that happen throughout the month also affect how much alcohol stays in your blood. And females’ bodies process alcohol differently from males’, so alcohol usually hits girls and women faster.

Remember, alcohol may be affecting you even if you aren’t slurring words or stumbling around. And once you’re drunk, the only thing that will sober you up is time. Coffee, cold showers, exercise, or other “cures” will not speed up how fast your body gets rid of the alcohol. 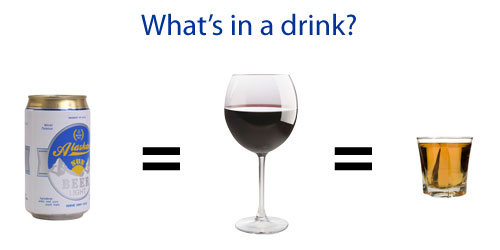 A 12-ounce can of beer, a 5-ounce glass of wine, and a 1.5-ounce shot of hard liquor all have the same amount of alcohol and the same effect on you. Mixed drinks can have even more alcohol. And don’t be fooled by a drink’s taste. A sweet or fruity drink can have just as much alcohol as a bitter one. Also, larger serving sizes are common and count as more than one drink.

What exactly do "impaired" and "intoxicated" mean?

But legal definitions aside, it’s important to remember that your mind and body can work less well — can be impaired — starting with your first drink. And don’t forget that if you’re under 21 and you drive with any alcohol in your body, you can get in serious trouble.

What is binge drinking?

Binge drinking means having a lot of alcohol on one occasion, like at a party. For females, having 4 or more drinks in a row is considered binge drinking.

Too much alcohol can cause serious physical problems, like:

It also can cause you to make bad decisions that could lead to:

And over time, if you drink too much you could develop:

What is the law?

Learn some key points to stay out of trouble:

What about my parents? They drink and it doesn’t seem to hurt them.

Because their bodies are mature, adults process alcohol differently and it affects them differently than it does teens. Teens are still growing in many ways, so even a small amount of alcohol can affect their physical and mental development. Besides, your parents are allowed by law to drink. When they drink, they should be doing it responsibly and in reasonable amounts — which means they never drive after drinking, and they have 1 to 2 drinks a day or less. So it's okay if your parents have a glass of wine at dinner or a beer during the football game. But if they misuse alcohol for any period of time, they will also cause serious damage to their health.

What are the signs you’re hooked on alcohol?

If you’re under 21, you’re not supposed to be drinking at all. But if you are drinking, it’s important to know whether you’re developing a serious problem. If you can relate to any of the items listed below, think about how alcohol is affecting your life and talk to an adult you trust for help.