Having fun and staying safe

How to deal with a car accident

What girls have to say about drunk drivers 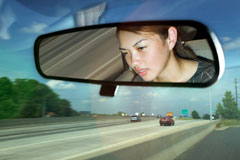 If you’re driving and you think you’re being followed, do not go home. Instead, you should:

Although it doesn’t happen a lot, there have been times when a woman driving alone has been pulled over and raped by a man pretending to be a police officer. If you’re signaled to pull over in a dark or deserted area, keep driving until you come to a well-lit, populated area. Let the police officer know you’re planning to pull over by turning on your flashers (also called hazards) and driving at a slower speed. In some areas you may be charged for failing to heed a police officer’s demands, but it’s better than risking your safety.