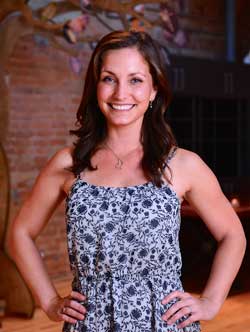 What is sexual bullying and how is it different from other types of bullying? Sexual bullying focuses on things like someone's appearance, sexual orientation, or sexual activity. It often involves unwanted sexual comments, attention, or physical contact. It can happen in person or online. If anything like this has happened to you, it's not your fault. No one ever has the right to bully you in any way.

Emily Lindin knows what it feels like to be sexually bullied. Her classmates started bullying her when she was 11 because her boyfriend and his friend spread rumors about her. The bullying lasted until she was 14. Read Emily's story about dealing with bullying and what she’s doing to help other people who are bullied feel less alone.

How old are you?

In your own words, can you explain what sexual bullying is?

Sexual bullying can involve making fun of someone for being "too" sexy or not sexy "enough." It can be unwanted poking, bumping, or other types of physical contact. It can be spreading sexual rumors about someone or sharing a private photo without consent.

Victims of sexual bullying are often blamed for bringing it on themselves, which is unfair. This blaming can be very isolating.

Will you tell us a little bit about your experience being bullied?

I was the first person in my grade to go through puberty. I was 10 years old, and all of my classmates began noticing that I was starting to be shaped like a woman. When I was 11, I fooled around a little with my boyfriend. After that, I got the reputation of being the school "slut." My boyfriend and his friend were making up rumors about me. Those rumors spread through the whole school. I had been in the "popular" crowd. But, after the rumors started, I had to make all new friends.

How did you deal with the bullying?

At first, I was devastated. I cut myself and even seriously considered committing suicide. I had been taught that my worth as a girl depended upon my sexual "purity," so I felt completely worthless. But I started to focus on schoolwork and singing. I worked hard and became a good singer. Plus, I did well in school because I studied so much. This helped me redefine myself in my own mind. I wasn't a "slut." I was a smart, hardworking girl who loved to sing. As I became confident with this new identity, everyone else's definition of me started to change, too.

You recently decided to publish the diary entries you wrote while being bullied. Why?

Every time I heard about a teenage girl who committed suicide because she had been sexually bullied by her classmates, I remembered what I went through. I started thinking of ways that I could join the conversation and share my story. I realized that my old diaries were still in my childhood bedroom. I thought they might provide an important perspective. Who has the chance to read a middle school girl's diary — unless they're snooping? Maybe adults who wanted to help could benefit from reading about one girl's experience. Most importantly, maybe girls who were going through something similar would be able to relate and feel less alone if they read my diary. They'd see that they could overcome it, too.

You mention that you were "slut" shamed in your diary. What is "slut" shaming?

I define "slut" shaming as implying that a girl or woman should feel guilty or inferior for her real — or perceived — sexual behavior.

How did this inspire you to start The UnSlut Project?

The UnSlut Project grew accidentally. It started as a blog where I shared my diary entries, but I immediately started to receive emails from girls and women who wanted to share their experiences. There were so many people who could relate to my experience. It was like I had sent an invitation, just by sharing my personal story. Now, The UnSlut Project is a supportive online community. It offers girls comfort. They can hear from others who have experienced and survived sexual bullying and "slut" shaming.

It's so important that all these diverse voices are heard. The stories share a common thread, but everyone responds to these situations differently.

What's your advice for girls who may be dealing with this at school?

My advice is to define yourself in your own mind. You are not a "slut," no matter what anyone tells you. You get to decide who you are. Focus on what you like doing, or pick up a new hobby. Develop that skill or talent! If you can, develop new friendships outside of the toxic school environment.

In the moment, my go-to reaction for people who bully is to "kill them with kindness." It's a lot harder to keep bullying someone who responds with a genuine smile and says, "Well, I don't feel that way about you. I think you're pretty cool."

What can other girls do to help stop sexual bullying?

We need to speak up for each other. Every time. Remember, the person who is calling her a "slut" could be calling you a "slut" the next day. We are all at risk of being the target of "slut" shaming, because it's about the shamer's perception of us. It's not actually about us. So we need to support each other. If you're the witness of sexual bullying, it's important to get adults involved. Sexual bullying can turn into sexual assault.

What can parents do to help stop sexual bullying?

Parents need to start by addressing their own discomfort talking about sex. It shouldn't get in the way of their child's education or safety. Instead of starting a conversation about sex out of the blue, parents can choose an event in the news. For instance, parents can read a news story about Bill Cosby with their daughter and talk about it. It's an opportunity to talk about speaking up. We need to help girls and boys think critically about sexuality and relationships at a young age in an age-appropriate way.

Yes! I've turned the diary I published online into a book. It's coming out December 27. It's called UnSlut: A Diary and a Memoir. I also made a documentary called UnSlut: A Documentary Film, and it's currently screening in theaters, community centers, and campuses around the country. If you'd like to bring it to your school or town, we can make it happen. Join the movement on social media by using #UnSlut and following @UnSlutProject on Twitter and @emilylindin on Instagram.

Have questions about bullying and what you can do to deal with it? Visit our Bullying section.

If you or someone you know has thoughts of suicide because of bullying, contact the Lifeline suicide hotline by chat or by phone at 800-273-TALK (8255). If there is an immediate risk, call 911 or go to the nearest hospital emergency department.