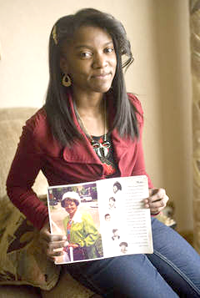 Determined to find a cure for cancer

Jazmin Branch knows how horrible cancer is. After two people close to her got breast cancer — one surviving and one losing her battle — she knew she had to do something about this disease. She started to research the reasons people don’t get screened for cancer. Read about what happened when she entered her research project in the 2010-2011 Young Epidemiology Scholars (YES) Competition, her advice for girls interested in science and math, and her drive to cure cancer once and for all.

How old are you and where are you from?

What sparked your interest in cancer?

When I was in the eighth grade, my grandmother died of cancer. In the same year, my counselor, Ms. Dorothy Connie, also got breast cancer. She survived. My interest in cancer began that year and has been part of my life ever since.

Science has always been a passion of mine. It was always easy for me to understand. My interest in research was more gradual. It started in 2010 during my internship with the American Cancer Society. Through the internship, I was able to combine both interests.

How did you find out about the Young Epidemiology Scholars (YES) Competition?

I found out about the YES Competition by researching different scholarships that were available for students in their junior year of high school. But, I did not really know what epidemiology, the study of diseases, meant. That summer, I learned more about epidemiology at my internship with the American Cancer Society. I also learned about epidemiology by working with Dr. Faith Davis from the University of Illinois at Chicago. Dr. Davis told me about the YES Competition, so I decided to apply.

How did you end up doing in the competition? Did you win?

Although this was the eighth and last YES Competition, I recommend that all students try to join competitions like this one. You never know how far you will go. I didn't think I would make it further than a semi-finalist. The money you win is just a perk. The experience, the people, and the things you learn are what matters. I enjoyed every second of my time in Washington D.C. talking about what I knew and learned from others.

Tell us about the research project you did for the competition.

The title of the project is “Analysis of Existing Disparities in Breast and Cervical Cancer Screening among African American and Latina Women.” Basically, I researched why women do or don’t get breast and cervical cancer screenings.

I looked at old data from a church program in Chicago that promoted breast and cervical cancer screenings. I saw that African-American women without health insurance usually didn’t get screened for cancer. If they didn’t know much about cancer, they also probably didn’t get screened.

For Latina women, not having health insurance was the only thing that kept them from getting screenings.

One participant at the regional finals for the YES Competition had a similar project. It looked at how religion keeps some Latina women from getting screened for cervical cancer. It would be interesting to see how religious beliefs play a role in other health decisions women make. If I kept doing my research, I would want to look at that.

What do you hope your research will accomplish?

I hope to show the Chicago Public Schools system that it is important to teach kids about breast and cervical cancer at a young age — especially about the importance of getting screened. This could keep people from dying of cancer in Chicago.

What would you tell other girls who are interested in science and math but aren't sure of themselves?

Nothing can stop you. If you’re interested in something, go for it. I know some teens aren’t sure about studying these subjects because they are hard. But hard work pays off! You can accomplish anything you set your mind to. Even though there are fewer women than men with jobs in science and math, don’t let that stop you from following your dreams. Intelligence will get you far, but work ethic, dedication, and passion will lead to your success. You can do it!

Do you have plans to go to college?

Yes. This fall, I will be a proud freshman at Washington University in St. Louis.

What do you want to do after college?

After college, I plan to go to medical school. I want to be a doctor but I also want to do cancer research. My goal is to find the cure for cancer.

What is your favorite food?

I have several favorites, but the one that trumps them all is my mom’s homemade taco salad. It’s the best dish ever!

What are your favorite physical activities?

I also like cheerleading. My favorite part of cheering is tumbling. It is exhilarating to float in the air, if even for a moment. I feel like a rebel when I tumble as if I am defying the laws of gravity. I remember when I first learned how to do a back tuck. I thought it was the most amazing feeling in the world. Tumbling is a fun pastime and I recommend everyone give it a try at least once.

Also, I participate in the dance ministry at Pullman Christian Reformed Church in Chicago. I love the adrenaline rush I feel before performing and the way the moves come so naturally when I’m in the element. I feel like, for that moment, I’m actually speaking to God. Though I am fairly new to this activity, I truly cherish it.