The Office on Women’s Health (OWH) launched Best Bones Forever! in 2009 to encourage girls ages 9 to 14 and their friends to “grow strong together, stay strong forever!” With a focus on fun and friendship, the main goal of Best Bones Forever! was to improve girls’ bone health behaviors, which include eating plenty of foods with calcium and vitamin D and participating in regular physical activity.

OWH led a range of activities to reach girls where they live, learn, and play. OWH created attractive, interactive, free campaign materials and sent to them to communities around the country. Best Bones Forever! engaged a large, diverse network of partners who created products branded with the campaign logo, promoted campaign messages and activities through their publications, distributed materials, and featured the campaign at their events.

Over the 2009–2010 school year, Best Bones Forever! worked with community coalitions in North Las Vegas, NV; Pinal County, AZ; and Ulster County, NY, to pilot a community-level behavior change intervention. In addition to testing the intervention, which was a 10-session program focused on physical activity and nutrition for girls ages 9 to 14 and their parents, the coalitions conducted community activities to raise bone health awareness. An evaluation of the program revealed increased bone health knowledge, attitudes, and behaviors in the pilot site communities.

In addition, Best Bones Forever! coordinated a series of contests to get girls moving and thinking about their bone health. In 2010, the campaign held an Atlanta-based dance competition. In 2011, OWH expanded the dance contest to the national level. The Best Bones Forever! Let’s Dance Contest invited girls around the country to create dance teams with their friends and compete. OWH also worked with community youth groups to organize two writing contests (one in Dallas in 2010, the other in Atlanta in 2011), for which girls submitted stories about the activities they and their friends do to strengthen their bones.

Over the course of the campaign, OWH published three journal articles: 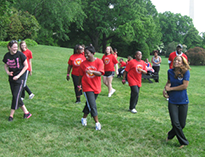 In 2014, the Office on Women’s Health concluded its work on the Best Bones Forever! campaign and transferred leadership to American Bone Health, a nonprofit organization that had been a longtime partner of the campaign. The campaign now lives at www.bestbonesforever.org.

= You will need Adobe Acrobat Reader® to view some of these files after you've downloaded them. If you have problems with PDF documents, please download the latest version of the Reader®.